The ENTSO-E 10 Years Conference, held in Helsinki, Finland, on 13th November 2019, takes a look at various issues affecting the European electricity transmission system operators (TSOs) now and in the future. ENTSO-E, the European Network of Transmission System Operators for Electricity, represents 43 TSOs from 36 countries across Europe.

The agenda for the day includes topics such as ‘ENTSO-E Vision 2030’ and ‘Building the Grid for 2030’, as well as two panels: ‘Innovative and digital solutions’ and ‘Nordic-Baltic Experience’.

Jukka Ruusunen, CEO of Fingrid, is one of the founding members of ENTSO-E.

“The world ten years ago was a different place,” he says, pointing out to the fact that this decade has brought a lot of new opportunities to boost European-wide collaboration.

“The decision to establish ENTSO-E was a smart one. I’m glad we did it,” he says.

When ENTSO-E was established, taking over Nordel’s activities, the new entity set the parameters for Nordic cooperation. In one stroke, the family gained more than 40 new members, Ruusunen describes the transition.

“ENTSO-E became Fingrid’s new family and the rallying point for cooperation,” he looks back.

According to Ruusunen, a single internal market and a common European playing field have brought stability and predictability to the operations of TSOs. He also points out that for a Northern country such as Finland – that perpetually wrestles with the cold and the dark – pushing electrification is really important.

“With ENTSO-E, we’ve been able to enjoy a new level of collaboration,” he says, adding that normally there is not just one solution to any given problem, but, instead, several solutions out there.

Ruusunen also remarks that several Finnish traits – such as technology orientation and willingness to experiment – have “fit right in” in the ENTSO-E culture.

“We are getting things done together, with the focus always on future. You ain’t seen nothing yet.”

Hervé Laffaye, ENTSO-E President, points out that there are 500 million citizens served in the “largest transmission system in the world”. The system keeps evolving, for example, on the digital side:

“The cyber layer is of growing concern as we need a good level of security.”

According to Laffaye, market interconnection, network planning & innovation and system operation are at the heart of TSO cooperation.

“I am confident that we will succeed in achieving our objectives.”

Riku Huttunen, Director General of the Energy Department at the Ministry of Economic Affairs and Employment, comments that the EU’s new energy legislation emphasizes the role of the TSOs as nodes of collaboration networks. EU wants to achieve carbon neutrality by 2050 and this is also one of the themes that Finland has consistently promoted during its ongoing EU presidency.

ENTSO-E has its eye on the year 2030, which is pit stop of sorts on the way to 2050. According to EU targets, the share of renewables of total energy production should be 32% by 2030. The CO2 emissions should be cut by 40 % from the present level and energy efficiency should be increased by 32,5 %.

Huttunen admits that the targets pose plenty of challenges to many European players right now, but – speaking as someone who has been following the situation intently for some time – he believes that there is a “genuine desire” to reach the targets together.

“Presently, we are taking action on the recognized issues and opportunities instead of waiting around,” he says, adding that in all probability, something totally new will also emerge by 2050.

Fingrid Magazine covers the
ENTSO-E 10 Year Seminar on 13th November, and publishes several articles on the most relevant themes of the event. Fingrid is also hosting the ENTSO-E Digital Event in Helsinki on 14th Nov.

Finland’s Presidency of the Council of the EU is ongoing until the end of  the year 2019.

What priorities for the European Commission on energy? 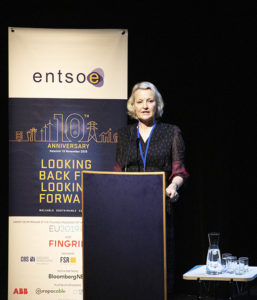 She talked about working on a European New Deal towards achieving carbon-neutral future. In her mind, financing is a key issue: Europe needs to really mobilize private investment.

“We need EUR 400 billion annually for the next decade, mostly from private sector,” she said, noting that Europe is doing well (on the number of patents, for instance), but needs to increase its momentum.