Fingrid is constantly on the lookout for new ways to take advantage of transmission line rights-of-way. Organic collection areas and insect hotels are among the latest experiments.

There is a shortage of organic collection products like berries, birch leaves, spruce tips, chaga mushrooms, and sap in Finland. Landowners in transmission line rights-of-way can apply for organic certification for the area and sell collected products at a better price than ordinary products.

Picking berries and other natural products is not the only use for transmission line rights-of-way – the owner can apply for organic status and receive better returns. This was the finding of a joint experiment by the Forest Centre and Fingrid to seek new solutions that benefit landowners.

“We want to encourage landowners to make the most diverse use of transmission line rights-of-way as possible. Among other things, we prepared nine idea cards to illustrate various alternatives and facilitate the utilisation of such areas. The idea cards also include a fact sheet on collection products,” says Tiina Seppänen, Expert at Fingrid.

We want to encourage landowners to make the most diverse use of transmission line rights-of-way as possible.

Demand for natural, organic products has been growing in Finnish and international markets: for example, it has been necessary to import organic forest berries to Finland. More organic collection areas are required to meet the market demand.

According to the Forest Centre, Finland already has the world’s largest organic collection area measuring almost 4.6 million hectares. However, this area could be up to four times bigger because almost all of Finland’s forestry land is suitable for organic farming.

A wide range of areas can be put to use as sites for growing organic collection products. The products picked in Fingrid’s certified organic transmission line right-of-way include birch leaves for organic cosmetics.

Insect hotels have become a familiar sight in the effort to counteract the loss of pollinators. Now they are being mounted on transmission line towers.

The number of pollinating insects has declined alarmingly due to the loss of insect habitats, insecticides, invasive species, and climate change. Approximately 75 per cent of cultivated plants require pollinators, especially bees, so the disappearance of these insects is a genuine threat to human food production.

Artificial nests known as insect hotels are one way of arresting the decline in pollinators. Fingrid has started an experiment in its areas in Kouvola, where it has mounted more than 60 insect hotels on transmission line towers. 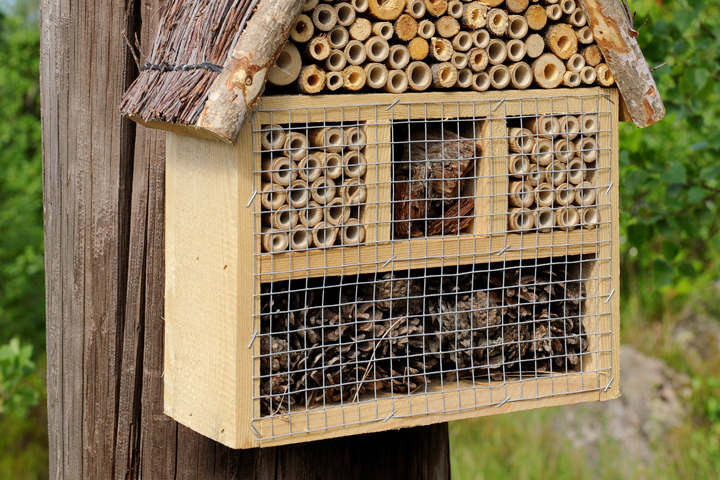 “In general, it is not permitted to affix anything to transmission line towers without Fingrid’s permission. This is for reasons of electrical safety. This experiment has been carried out safely on our own land,” says Tiina Seppänen, Expert at Fingrid.

The results of the experiment seem promising.

“A review conducted in July showed that most of the insect hotels had guests. One slightly amusing exception to this was cattle pasture areas, where we had to remove a few of the hotels because the normal residents of the fields refused to leave the artificial nests in peace.”

“Promoting biodiversity is one of our corporate responsibility goals. It calls for various kinds of action, both large and small. The #BeePower hotel pilot project also caused a buzz among Fingrid’s personnel: individual hotels have been popping up in increasing numbers outside employees’ homes,” says Marina Louhija, Senior Vice President in charge of corporate responsibility.